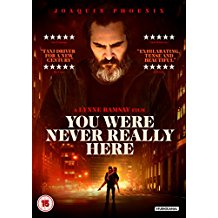 FROM LYNNE RAMSAY, THE ACCLAIMED DIRECTOR OF ‘RATCATCHER’ AND ‘WE NEED TO TALK ABOUT KEVIN’.

Lynne Ramsay (Morvern Callar) and Joaquin Phoenix (Her, Gladiator) combine to devastating effect in YOU WERE NEVER REALLY HERE, a powerful and intensely thrilling reworking of the crime genre. 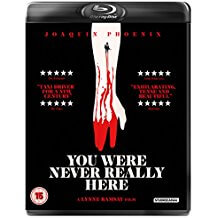 Having premiered at the 70th Cannes Film Festival, where Phoenix won the award for Best Actor for his career-best performance and celebrated British director Ramsay was the joint winner for Best Screenplay, YOU WERE NEVER REALLY HERE has since garnered universal critical acclaim.
Joe, a tormented but ruthlessly brutal hired gun sets out to rescue a young girl from a sex ring, only to find himself weathering a storm of gruesome conspiracy and violent retribution when matters go awry. As the violence swirls both around him and through him, Joe’s deeply damaged psyche is revealed, but will this maelstrom lead to his awakening?

Written and directed by Ramsay and based on the book by Jonathan Ames, YOU WERE NEVER REALLY HERE marks an outstanding breakout performance by Ekaterina Samsonov,and yet another mesmerising, eerie score from Radiohead’s Academy Award® nominee Johnny Greenwood.

Dubbed the post-modern Taxi Driver, this taut and excruciatingly tense tale of a solitary and deeply troubled underworld mercenary in not to be missed.

To be in with a chance of winning 1 of 2 DVDs of YOU WERE NEVER REALLY HERE please send your name, address and answer to [email protected]

Q) In which David Lynch film did actress Judith Roberts appear as ‘Beautiful Girl Across The Hall’?