February 9, 2018 / giallo1971 / Comments Off on WIN!! THE RITUAL SURVIVAL BUNDLE / Released on Digital Download on 5th February and DVD on 12th February. 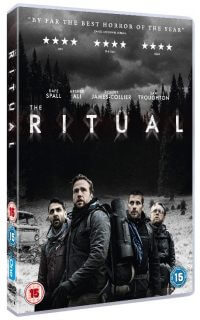 After the traumatic death of their close friend Robert, a group of University friends set off on a hiking trip to Sweden to reconnect and pay tribute to their lost friend. After one of the group falls and becomes injured, they decide to take a different route through an ancient, pathless forest to shorten their trip. However, something is lurking in the forest and soon they are being stalked, but by what? Based on the terrifying novel by Adam Nevill, The Ritual releases on Digital Download on 5th February and DVD on 12th February.

Lost with limited supplies, unsettling events begin to unfold and an impending sense of panic starts to creep in among the group. Someone or something is stalking them through the forest. Hungry, injured and fearing for their lives, will the group survive another night lost in the terrifying forest? Or will whatever is watching them from the darkness of the forest catch up with them…

The Ritual stars Rafe Spall (Life of Pi, The Big Short), Robert James-Collier (Downton Abbey), Arsher Ali (Four Lions, Line of Duty), Sam Troughton (Robin Hood, Vera Drake) and is directed by David Bruckner (The Signal, Southbound). The Ritual is an intense and suspenseful horror that leaves viewers wondering what is coming next.

TO BE IN WITH A CHANCE OF WINNING A FANTASTIC PRIZE BUNDLE CONSISTING OF ‘THE RITUAL’ BRANDED SLEEPING BAG, HIP FLASK, MAG-LITE SOLITAIRE AND FIRST AID KIT – PLEASE SEND Y0UR NAME, ADDRESS AND ANSWER TO THE FOLLOWING QUESTION TO [email protected]

Q)WHAT WAS THE NAME OF DIRECTOR DAVID BRUCKNER’S SEGMENT OF THE 2012 HORROR OUTING V/H/S ?