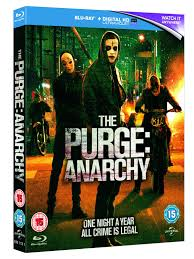 Cave Of Cult and Universal Pictures UK offer a Blu-ray and a rare Purge premium mask to one lucky winner.

To be in with a chance of winning a Blu-ray copy of The Purge:Anarchy and a rare Purge premium mask just send your name and addres to [email protected] by close of play today!

The Purge Anarchy sees the mayhem of the purge, where one night a year, all crime including murder is legal, hit the urban sprawl of Chicago. While some purge for kicks, and some purge for revenge, some, like Shane (Zach Gilford, Devil’s Due) and Liz (Kiele Sanchez, Kingdom) just try to survive. When their car is sabotaged on their way home on the eve of the purge they are left stranded, and are relentlessly stalked as they try to find safety…  until their paths cross with a well-armed purger known only as ‘Sergeant’ (Frank Grillo, Captain America: The Winter Soldier).

Get off the streets, lock the doors and prepare for The Purge: Anarchy. From the producers of Insidious and Paranormal Activity, The Purge Anarchy comes to Blu-ray and DVD today from Universal Pictures (UK). A box-set including both The Purge and The Purge: Anarchy is also available today.