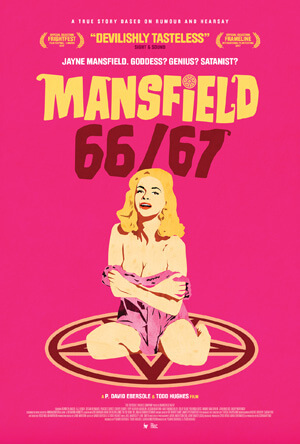 ”MANSFIELD 66/67 ”
DIRECTED BY P. DAVID EBERSOLE AND TODD HUGHES
Jayne Mansfield. Goddess? Genius? Satanist? She was the blonde bombshell created to rival Monroe.Adored by the public, her star rose until, briefly, she was one of the biggest stars in the world. Jayne Mansfield constantly courted publicity and eventually her personal life engulfed her career and she sought solace in drink, drugs and Anton LaVey, the charismatic leader of the Church of Satan. Her fatal car crash in 1967 led to many conspiracies, was it a curse? Did the devil make her do it? Made to coincide with the 50th anniversary of her death, MANSFIELD 66/67 is a gloriously entertaining film, Hollywood Babylon style exploration of the last two years of the life of ‘the first reality TV star’ Directed by P. David Ebersole and Todd Hughes (Hit So Hard; Room 237), the film features interviews with John Waters, Kenneth Anger, Cheryl Dunne, UK pop star Marilyn, actresses Tippi Hedren and Mamie Van Doren. 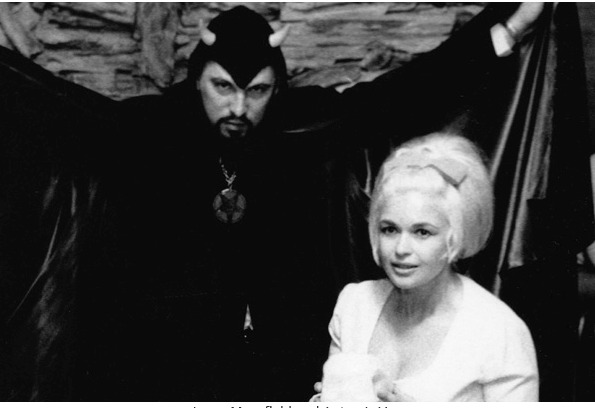 Jayne Mansfield was the blonde bombshell to rival Monroe and who
constantly courted publicity. From ‘The Girl Can’t Help It’ to her final cameo
role in Gene Kelly’s ‘A Guide to the Married Men’ she was adored by the
public.
However, her personal life impacted on her career as she sought solace
in drink, drugs and Anton LaVey, the charismatic leader of the Church of
Satan.  Her fatal car crash in 1967 led to many conspiracy theories.
A firm favourite at Frameline Festival and FrightFest, MANSFIELD 66/67 combines archive film footage and new drag routines specially created for the film. It’s a gloriously entertaining exploration of the lasting impact of myth, the rise of the Feminist movement of the 1960s and a celebration of ‘the first reality TV star’.
View the trailer here:    https://youtu.be/5EGerBQFbnw

TO BE IN WITH A CHANCE OF WINNING ONE OF THREE DVDs OF ‘MANSFIELD 66/67’ please send your answer, name and address to [email protected]:

Question) What was the name of the Episode of  Lux Video Theatre (1954) where Jayne was billed as ‘Girl At Piano’?
Category: Upcoming Frights /
Wordpress Theme by ThemeZee