WIN !! IN ORDER OF DISAPPEARANCE / Available on DVD now from Metrodome Distribution.

February 4, 2015 / giallo1971 / Comments Off on WIN !! IN ORDER OF DISAPPEARANCE / Available on DVD now from Metrodome Distribution. 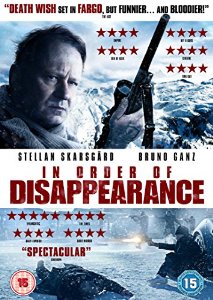 KILL-DOZER HAS A DEATH WISH IN FARGO !!

Introverted and hard-working snow plow driver Nils (Stellan Skarsgard) has just been named citizen of the year, when he receives news that his son has died of a heroin overdose. Disbelieving the official report, Nils soon uncovers evidence of the young man’s murder—a victim in a turf war between the local crime boss, known as “The Count,” and his Serbian rivals.Armed with heavy machinery and a good dose of beginner’s luck, Nils embarks upon a quest for revenge that soon escalates into a full-blown underworld gang war, with the body count spiraling ever higher and higher.

For a chance to win 1 of 3 DVD copies please send your name and address to [email protected] by 5pm tomorrow, 5th February.