WIN a copy of ODD THOMAS on DVD from Metrodome Distribution. 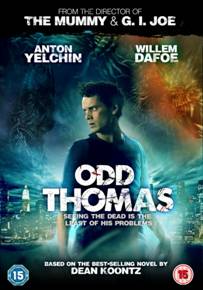 Up for grabs are 3 DVD copies of ODD THOMAS released by Metrodome Distribution on 3rd February 2014.To win one of these lovely prizes you simply have to answer the following question:

What is the name of Anton Yelchin’s character from Lee Tamohari’s 2001 thriller ALONG CAME A SPIDER ? * A) SERGEI   * B) DIMITRI  * C) VLADIMIR

Email yor answer to [email protected] and i will pick 3 lucky winners. Deadline for entries in 17.00 GMT, Friday 31st January 2014.

In a California desert town, a short-order cook with clairvoyant abilities encounters a mysterious man with a link to dark, threatening forces. Stephen Sommers adapts Dean Koontz’s best-selling book Odd Thomas, concerning a clairvoyant 20-year-old (Anton Yelchin) who discovers a dark secret about a stranger in his hometown.