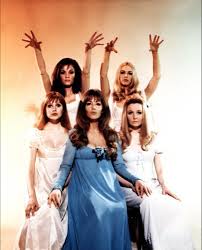 The vampire Countess Carmilla Karnstein (Ingrid Pitt) makes her way through the Austrian countryside creeping into the households of aristocrats and taking their daughters as victims. The families begin to catch on when a pattern of deaths in the area takes shape. Vampire hunter Baron Hartog (Douglas Wilmer) is called upon to put an end to Carmilla’s reign of terror.