WIN 1 OF 2 EXCLUSIVE ‘VATICAN TAPES’ TEE SHIRTS! Send your name and address to [email protected] before 4th January to be in with a chance of winning.

After a young woman (Olivia Taylor Dudley) begins to express increasingly erratic and strange behaviours, her father (Dougray Scott) and boyfriend (John Patrick Amedori), along with a priest Father Lozano (Michael Peña) and two Vatican exorcists (Djimon Hounsou and Peter Andersson), come to realize that she’s been taken over by an ancient satanic force. It’s all up to Father Lozano to wage war for more than just Angela’s soul, but for the world as we know it.
The Vatican Tapes Premiered at Halloween FrightFest 2015. 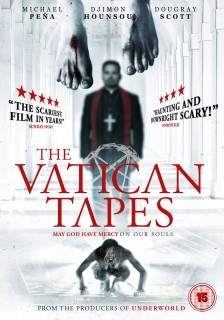