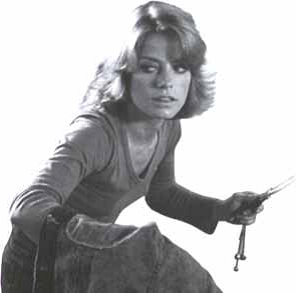 This was Jack Hill’s last Exploitation classic. He is the master of his trade who gave us such scorchers as SPIDER BABY(64),THE BIG DOLL HOUSE (71),THE BIG BIRD CAGE (72),COFFY (73), FOXY BROWN (74) and SWINGING CHEERLEADERS (74).

The credits kick in with the SWITCHBLADE SISTERS logo clicking shut like a flick knife over black and purple stills of the Dagger Debs gang.The Dagger Debs meet their monolithic boyfriends The Silver Blades in a burger bar. A stranger, Maggie, proves she can hold her own in a fight.The Debs leader Lace (Robbie Lee, who spits out her dialogue through permanent clenched teeth) takes a shine to Maggie, letting her join the gang .All the Debs are thrown in juvenile detention for roughing up a sleazy loan shark.We are treated to a hilarious fight complete with stunt guy in bad dress and wig as breasts pop out all over the place.Maggie is officially made a Dagger Deb and has to steal the medallion from rival gang leader Crabs (Chase Newhart) as an initiation test.Crabs looks a treat with gold shirt, mad hair, braces, checked flares and huge platform heels.Maggie goes to Crab’s headquarters, bites him on his johnson and swipes his beloved medallion.Meanwhile,Lace tells Dom she is pregnant with his baby, his charming reply being “ How do i know it’s mine ? What if it is mine,you think I’m ready to haul freight in some fucking warehouse so you can have some brat suck on your tit!” 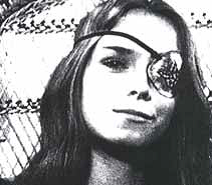 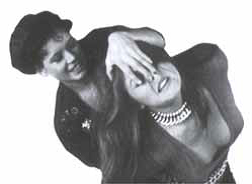 The Daggers, Dagger Debs and Crabs gang have a shoot-out in the local Roller Derby rink.Dom is killed with Lace wounded, losing the baby. With Lace out of action Maggie takes over the gang and changes their name to The Jezebels. When Lace returns from hospital the rest of the gang want her out of the gang.Lace and Maggie have a switchblade fight to the death, Maggie being the victor.