THE JEKYLL AND HYDE PORTFOLIO (1971) Director: Eric Jeffrey Haims / 81 minutes / Color / AR: 1.85:1
In this hybrid of slasher film and sexploitation, a mad killer is stalking the staff at a secluded nursing academy. Who will be the next victim and why does the killer carve a ‘V’ into the bodies of his beautiful female victims ? Only previously available in the UK on the super rare and highly collectable Intervision Pre Cert, Vinegar Syndrome’s Uncut remasterd release is great news for Horror and Sexploitation fans.Just when you think a film has been lost forever…… ! 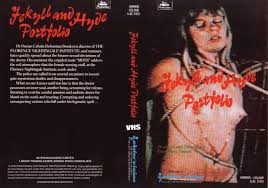