THE EYES OF MY MOTHER hits UK cinemas 24th March 2017 from Park Circus. 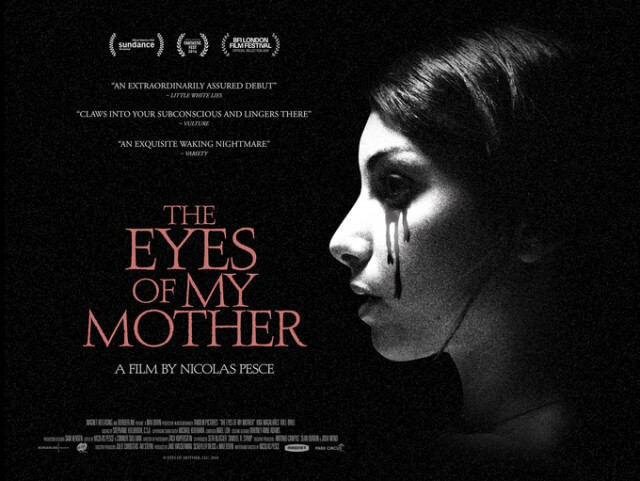 Park Circus has today announced that it will release the critically acclaimed American gothic horror THE EYES OF MY MOTHER, directed by Nicolas Pesce, in UK cinemas on 24 March 2017.

Francisca (played by Kika Magalhaes in a breakout performance) has seemingly been unfazed by death from an early age – her mother, formerly a surgeon in Portugal, imbued her with a thorough understanding of the human anatomy. When tragedy shatters her family’s idyllic life in the countryside, her deep trauma gradually awakens some unique curiosities. As she grows up, her desire to connect with the world around her takes a distinctly dark form.

The hauntingly beautiful and shockingly original debut from filmmaker Nicolas Pesce stars Kika Magalhaes, Will Brill, Clara Wong, Flora Diaz and Joey Curtis-Green, is produced by Jacob Wasserman, Schuyler Weiss, Max Born, and executive produced by Borderline Films’ Antonio Campos, Sean Durkin and Josh Mond. The film fuses classic horror ingredients with gothic black-and-white imagery and was called the “discovery of this year’s Sundance” by Indiewire’s Eric Kohn, where it was in the Official Selection category as well as the BFI London Film Festival 2016. It has already received strong critical acclaim from Variety calling it “an exquisite waking nightmare” and Little White Lies who said it was “an extraordinarily assured debut.”
Nick Varley, joint-CEO of Park Circus said; “We are delighted and proud to be releasing this extraordinary film in UK cinemas and giving audiences the opportunity to experience the incredible work of first-time film maker Nicolas Pesce.”