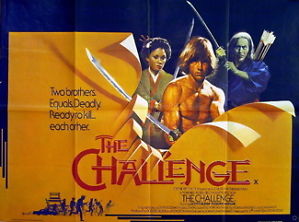 Rick, a down-and-out American boxer, is hired to transport a sword to Japan, unaware that the whole thing is a set up in a bitter blood-feud between two brothers, one who follows the traditional path of the samurai and the other a businessman.Rick undertakes samurai training from the other brother, but joins his cause. He also becomes romantically involved with the samurai’s daughter.