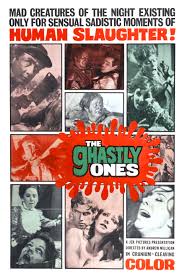 Presenting a triple-feature collection of bad film auteur Andy Milligan’s unique and twisted world of horror scooped from the gutters and loaded with grime. Shudder in disbelief as greedy relatives gather to reap their inheritance only to find themselves being sawed in half in THE GHASTLY ONES (1968). Pray you’re not next when the unholy Father delivers your last rites with the blade of an axe in GURU THE MAD MONK (1970). Got blood? You’ll need it in quarts for the thirsty vampire babes in THE BODY BENEATH (1970).