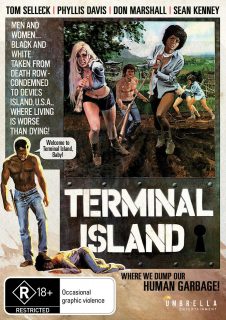 America in the near future, the Supreme Court drops the death penalty in favour of an initiative that designates San Bruno island as a dumping spot for first-degree murder convicts, free to do what they like except leave. Surrounded by murderers and mayhem, without any law or law-keepers it is a living hell-on-earth!

This underrated exploitation classic, directed by Stephanie Rothman,features Phyllis ‘Sweet Sugar’ Davis and Roger E.Mosley and Tom Selleck who would both go on to appear in the hugely successful ‘Magnum P.I.’ Also starring Don ‘The Thing With Two Heads’ Marshall!