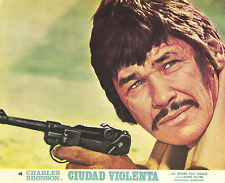 In A City Set To Explode, One Man Has Just Lit The Fuse

After a bloody double-cross leaves him for dead, professional hit man Jeff (Charles Bronson) tracks the shooter and his beautiful mistress (Jill Ireland) to New Orleans. But when Jeff takes both revenge and the woman, he finds himself blackmailed by a powerful crime boss (Telly Savalas) who wants the fiercely independent gunman to join his organization. Jeff refuses, and is hunted through an unforgiving city where love is like a loaded gun and debts of vengeance are paid in bullets.

Inspired by Jean-Pierre Melville’s LE SAMOURAI and originally released in the U.S. as THE FAMILY, VIOLENT CITY is packed with savage action and a shocking twist ending. Directed by Sergio Sollima (REVOLVER, THE BIG GUNDOWN) from a fast-paced screenplay co-written by Lina Wertmuller (SWEPT AWAY) and featuring a pulse-pounding score by the legendary Ennio Morricone (THE UNTOUCHABLES), VIOLENT CITY has been transferred from the original camera negative and is presented complete and uncut.