SADAKO VS KAYAKO available exclusively on SHUDDER this week!!

January 24, 2017 / giallo1971 / Comments Off on SADAKO VS KAYAKO available exclusively on SHUDDER this week!! 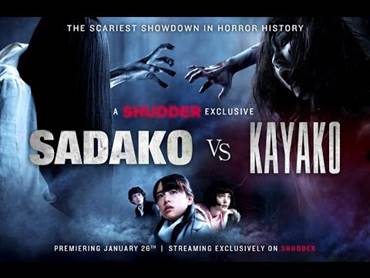 AMC’s excellent streaming service SHUDDER have the riotously fun J-Horror face-off SADAKO VS KAYAKO coming as an exclusive this week.

Hideo Nakata’s Ringu and Takashi Shimizu’s Ju-On: The Grudge are known worldwide as two of the most terrifying and groundbreaking horror films ever made. To this day, horror fans debate: “Which of the two is truly scarier?” and “Whose curse is stronger, Sadako’s or  Kayako’s?” No one ever thought that these questions would get answered, let alone think that we would ever see these infamously horrifying demons face off. At long last, Sadako vs. Kayako brings Ringu’s and The Grudge’s two forces of evil into the ring for the ultimate grudge match.

Responsible for this franchise-blending is director/screenwriter Koji Shiraishi, who is known for creating unconventional spiritual and supernatural scenes in films such as The Curse, Carved: The Slit-Mouthed Woman, and the Kowasugi series. Now, he brings the characters from Ring and The Grudge back to the big screen as he delivers viewers a wildly fun, tongue-in-cheek thrill ride that finally answers the question: whose curse is stronger?

SADAKO VS KAYAKO is  released exclusively on SHUDDER this Thursday 26th January.