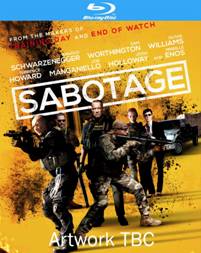 Ultimate action hero Arnold Schwarzenegger makes an explosive comeback alongside an incredible supporting cast in SABOTAGE, the most brutal action thriller of his career to date, released on Blu-ray, DVD and digital platforms from 15th September 2014 by Lionsgate Home Entertainment.

After raiding a drug cartel’s mansion, John ‘Breacher’ Wharton (Schwarzenegger) and his team of rogue agents hide $10 million of the hoard for themselves. Returning to retrieve the money later, they find it’s vanished… and the carnage begins. As the agents find themselves taken down one by one in increasingly sadistic and horrific ways, the race is on to find the culprit. When Breacher teams up with Caroline Brentwood (Williams), the officer assigned to investigate the murders, the team find themselves turning on each other, culminating in an explosive showdown where no one is safe – and everyone is a suspect.

Featuring the most violent, gory scenes of Schwarzenegger’s career, SABOTAGE is THE action thriller of the year- a must own for fans of old-school heroes, featuring nail-baiting tension throughout, and a return to form for the ultimate action hero of our time.