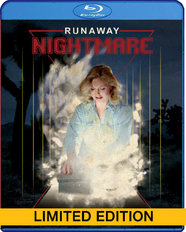 Mike Cartel’s unique vision is a mind-numbing blend of humor, surrealism and horror overtones, made over the course of two years and never officially released in its director’s cut! Long only available through an unauthorized VHS release, complete with SOV topless insert shots (included on our disc as extras).Vinegar Syndrome are presenting the film uncut and untampered with for the first time ever!

After discovering a woman buried alive, two Death Valley worm farmers are kidnapped by an all-female cult of gun runners who, after making the men into their sex slaves, force them to assist in a plan to steal a suitcase full of platinum from the mafia. Combining black comedy with elements of horror, action, thriller, and surrealist cinema, director/writer/producer/editor/star Mike Cartel’s (Pets, Bitter Heritage) RUNAWAY NIGHTMARE stands as one of the most fiercely unique works of outsider/cult cinema to emerge from the 1970s and 80s. Also featuring a co-starring performance from Georgia Durante, author of The Company She Keeps and crewed by Rowdy Harrington (director of Road House) and Daryn Okada (cinematographer of Mean Girls).
Director: Mike Cartel
94 minutes / 1982 / Color / 1.85:1