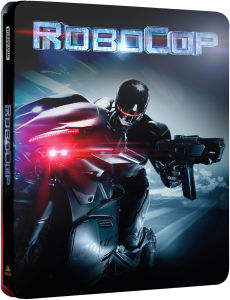 STUDIOCANAL is thrilled to announce the Home Entertainment release of the box office smash ROBOCOP, which arrives on Blu-ray™, DVD on 9th June 2014, following an EST release a week earlier on 2nd June 2014 .Directed by José Padilha (Elite Squad), ROBOCOP is a reimagining of Paul Verhoeven’s 1987 classic, in which a critically injured cop is transformed into a part-man, part-robot police officer designed to rid Detroit of crime.

The year is 2028 and multinational conglomerate OmniCorp is at the centre of robot technology. With robotic drones winning American wars around the globe, they feel ready to translate this technology to the home front. When loving husband, father and skilled cop Alex Murphy (Joel Kinnaman – Easy Money, TV’s The Killing) is critically injured in the line of duty, OmniCorp – headed by CEO Raymond Sellars (Michael Keaton – Batman, Need For Speed) – utilises its remarkable science of robotics to save his life. Returning to the streets of Detroit equipped with amazing new abilities, Murphy must deal with issues a regular man has never had to face before.