February 2, 2017 / giallo1971 / Comments Off on Long-awaited POPCORN to arrive on Blu-ray 7th March from Synapse Films. 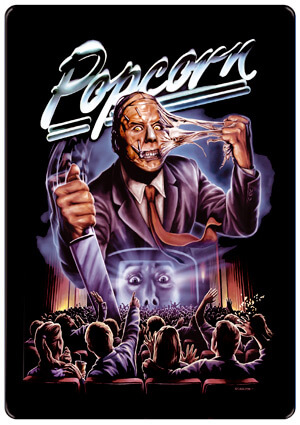 What could be scarier than an all-night “Horrorthon”? A group of film students finds out when they stage just such an event at an abandoned movie palace. In addition to the three features—MOSQUITO, THE ATTACK OF THE AMAZING ELECTRIFIED MAN and THE STENCH—they decide to screen a bizarre short called THE POSSESSOR, whose creator, Lanyard Gates, killed his family and set the theater on fire after its first showing. Maggie (Jill Schoelen, THE STEPFATHER) has been having frightening dreams that seem to be connected to THE POSSESSOR, and as the festival proceeds, the nightmare comes true for her and her friends as they are stalked and slain by a mysterious killer. Has Gates survived to continue THE POSSESSOR’s deadly legacy? 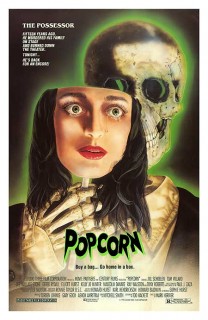 A loving homage to ’50s/’60s B-movies (the trio of flicks shown at the Horrorthon all have accompanying William Castle-style gimmicks), POPCORN is also an insanely fun horror/comedy in its own right. Pseudonymously written by Alan Ormsby (CAT PEOPLE, DEATHDREAM), who directed the films-within-the-film, it celebrates the joys of old-fashioned creature features and ’80s-style stalk-and-slay, with a great cast additionally including Dee Wallace Stone (THE HOWLING), Tony Roberts (AMITYVILLE 3-D), Ray Walston (THE STAND), Malcolm Danare (CHRISTINE) and Kelly Jo Minter (A NIGHTMARE ON ELM STREET 5). Pop some popcorn of your own and settle in to watch this new high-definiton transfer, which comes with a box full of bonus features!