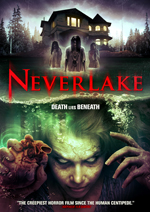 On a trip to visit her estranged father in Italy, an American teenager is thrown into a world of legend, mystery and horror in Neverlake, coming to VOD (June 6) and DVD (July 29) from Uncork’d Entertainment.

When an American teenager visits her estranged father’s home in Italy, she expects to see the world and bond with her dad. But Jenny soon discovers her expectations are far from reality.

With her father immersed in his work, she encounters a peculiar group of children who take her to the Neverlake, which ancient legend calls the “Lake of Idols” for the healing powers of its water. In this mystical place, she is thrust into the mystery of three missing children and called upon by the 3,000-year-old spirits of the lake to retrieve ancient artifacts stolen from its murky depths.She soon uncovers an evil world of horrific secrets, cruel medical experiments and lies … which may lead closer to home than she knows.

Following a limited theatrical run in early June, Neverlake will be available June 6 through Comcast, iTunes, Xbox Live, Vudu and Amazon; and on inDemand and DVD July 29.

Neverlake is presented in widescreen with an aspect ratio of 16 x 9 (2.35) and 5.1 digital surround sound.