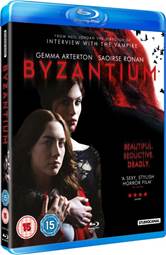 It has been 18 years since the release of Interview With The Vampire.Byzantium is a remarkable return to the vampire horror genre for Neil Jordan, quite possibly the finest vampire film of the last 15 years.

Starring GEMMA ARTERTON (Hansel & Gretel: Witch Hunters), SAOIRSE RONAN (The Host) and directed by NEIL JORDAN (Interview With The Vampire). Byzantium is a new breed of horror which takes vampire mythology to a new level of modern terror as mother and daughter seduce and explore new ways to kill their victims!

Upon the wind swept shores of a desolate coastal town stands the Byzantium guesthouse. After years of being abandoned, its doors are about to be opened again by the predatory and seductive Clara (Arterton), who plans on turning the hotel into a brothel, and her young and introverted daughter Eleanor (Ronan). But these mysterious women have a dark secret that goes back 200 years and is about to reach its ungodly and deathly climax.