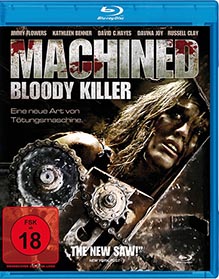 Collectors have been known to go to extreme lengths to get what they want. For Motor Man Dan, the ultimate would be to have his very own serial killer, to fulfill his sick, obsessive, murderous appetite. Ryan, the victim of a terrible accident who suffered severe head trauma, would be that missing piece to complete Motor Man’s demented collection. Motor Man would then tool and manufacture a half machine, half man, serial killer, which he would then orchestrate and produce an assortment of killing scenarios. From director Craig McMahon comes this gruesome/slasher tale of a desolate man that took collecting serious. Extras: Making of, 2 Original Trailer