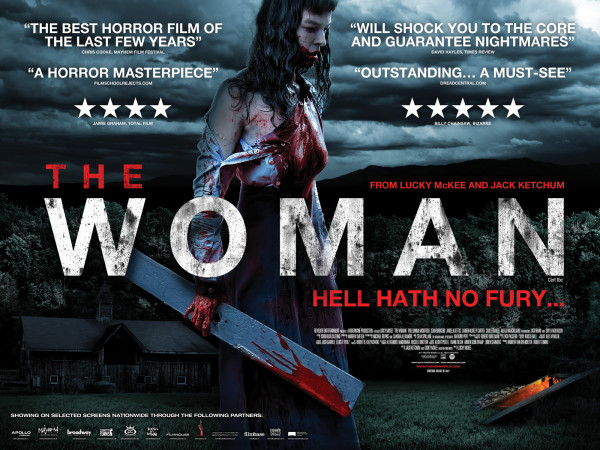 Noted as one of the most controversial films ever to be screened at the Sundance Film Festival,Lucky McKee’s The Woman depicts the psychological and physical brutality visited by what appears to be a normal American family upon a seemingly disadvantaged and helpless woman.

Lawyer and family man Chris Cleek (Bridgers) comes across a wild, feral woman (McIntosh) bathing in a woodland stream near the Cleek home.The decision he then makes will be one of deep regret. Chris decides to capture the woman, chaining her up in the fruit cellar with intentions to tame her.His long suffering wife Belle (Bettis) and their three children are all enlisted to help civilize the woman.
Soon the Cleeks’ fascination and well-intentioned compassion turns to resentment with a worrying degree of sadism.

The Woman is quite unlike any other recent horror film. It’s horror lies in the inhumanity of man towards man,lifting the lid on the lives of a typical American family while exposing the darkness that lies within us all.
This is Pollyanna McIntosh’s film. Her portrayal of The Woman will stay with you for some time to come.