aka The Fun House / The Cuckoo Clocks of Hell / At the Hour of Our Death. 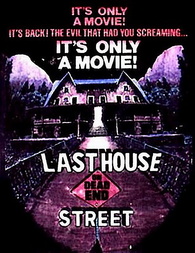 Notorious cult horror from director Roger Watkins. When drug dealer Terry (Watkins) is released from prison, he decides to take his revenge on society by creating a series of horrifically violent snuff movies. Recruiting a team of psychotics and sadists to help him work on the films, Terry lures his unsuspecting victims to his ‘studio’, where he films them being subjected to brutal tortures involving branding, amputation and dismemberment.