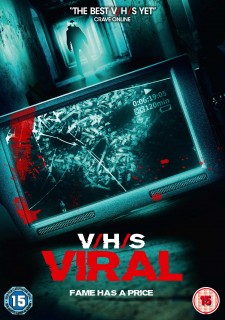 Get ready for scares. V/H/S Viral is the explosive third and final instalment in the celebrated American horror anthology trilogy. As talented writers and directors take us to some crazed, dark places.

VICIOUS CIRCLES
Fame-obsessed teens hell-bent on filming high-speed car chases to capture the next viral video discover they are the stars of a lethal sensation.
DANTE THE GREAT
An untalented illusionist discovers a cloak that grants him the power to perform real magic. He quickly becomes famous but learns the cloak requires sacrifices to work.
PARALLEL MONSTERS
A successfully created inter-dimensional portal leads to demonic parallel versions of reality – and total chaos for its inventor.

We follow a trio of skateboarders perform increasingly dangerous stunts until one injures himself and bleeds on a magic symbol. Out of nowhere a group of cloaked cultists attack.