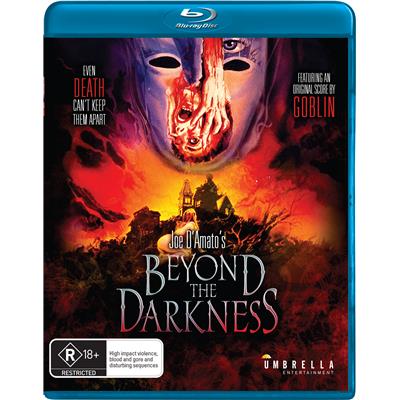 Previously unavailable in Australia and still banned in some parts of the world, Beyond The Darkness (Buio Omega – AKA The Final Darkness, Buried Alive and Dark Holocaust) is considered one of the most controversial, graphic and depraved Italian horror movies ever made. On an estate in the Italian countryside, Frank Wyler (Kieran Canter) mourns the mysterious hospital death of beloved fiancée Anna Völkl (Cinzia Monreale). With his subservient yet jealous housekeeper Iris (Franca Stoppi) hovering over macabre proceedings, the distraught taxidermist exhumes Anna from her grave and preserves her body with obsessive detail. Ever protective of his haunting domain but in search of something more to fulfil his aching heart, Frank ventures out on a deranged odyssey destined to plunge him into a dark and blood-dripping abyss of violence and insanity. Joe D’Amato’s 1979 horror film remains a cult classic-crossing the genre with the menace of Hitchcock’s Psycho, the obsession of Shelley’s Frankenstein and the cannibalism fetish of Fulci’s Zombie Flesh Eaters. Replete with a sinister gothic soundtrack by maestros of mayhem Goblin (Deep Red, Suspiria), Beyond The Darkness will rip your nerves apart and terrify you to the core.