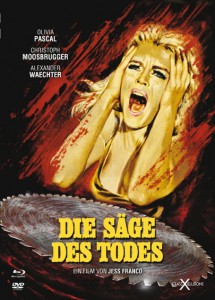 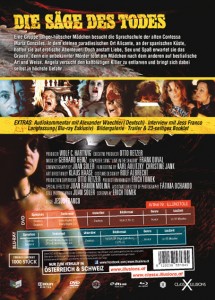 Class X Illusions’ Blu-ray release of Jess Franco’s Bloody Moon is a complete revelation. If you have not seen Franco’s gory slasher i urge you to seek out this release.

As the slasher genre stabbed its way into audiences’ hearts in the early ’80s, EuroTrash auteur Jess Franco was asked to create his own saga of slaughtered schoolgirls complete with gratuitous nudity, graphic violence, and gory set pieces.But just when you thought you’d seen it all, Franco shocked the world by delivering surprising style, genuine suspense and a cavalcade of depravity that includes incest, voyeurism, decapitation and roller disco. The luscious Olivia Pascal of ‘Vanessa’ fame stars in this twisted thriller that was once banned in Britain yet is now presented uncut and uncensored – including the the complete ‘stone mill power saw’ sequence.