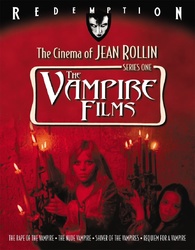 The Nude Vampire (1970) 85 min /Region free : Wealthy and decadent industrialist Georges Radamante rules over a strange secret suicide cult and wants to achieve immortality by figuring out a way to share the biochemistry of a young mute orphaned vampire woman.

The Shiver of the Vampires (1971) 95 min / Region free : A young honeymooning couple stop for the night at an ancient castle. Unbeknownst to them, the castle is home to a horde of vampires, who have their own plans for the couple.