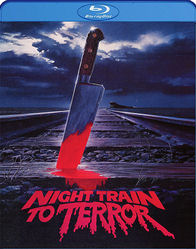 Aboard a fast moving train bound for Hell, God and Satan decide the fates of three unfortunate mortals. In HARRY, a fiendish killer keeps the horribly mutilated body parts of his countless victims in a diabolical tourture chamber. In GRETTA, a young woman, obsessed with death, takes part in an unspeakable ritual of Russian roulette. Finally in CLAIRE, a young woman and a middle aged Holocaust survivor are terrorized by the son of Satan! NIGHT TRAIN TO TERROR comes to you on home video for the very first time in its original aspect ratio and restored in 2k from 35mm film elements.