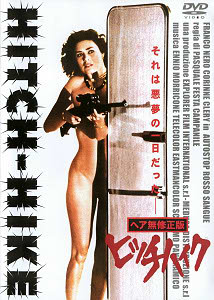 While on a cross-country drive, a bitter writer (Nero) and his beautiful wife (Clery) pick up a stranded motorist (David Last House On The Left Hess) who turns out to be a depraved psychopath.

Barely released theatrically in America, Hitch-Hike has been called “one of the greatest exploitation films no one has ever seen.” Co-writer/director Pasquale Festa Campanile packs this outstanding sleaze epic with wild performances, extreme violence and some very nasty surprises.