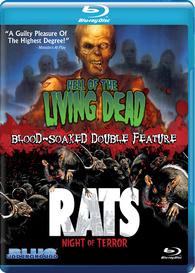 HELL OF THE LIVING DEAD:
When The Creeping Dead Devour The Living Flesh! An accident at a chemical plant unleashes a horrific virus, and an elite SWAT team is sent to New Guinea to investigate. But when they arrive on the hellish island, they discover a plague of flesh-eating zombies as well as a beautiful female reporter who practices nude anthropology. Can the commandos survive this cannibal rampage, uncover a shocking government secret, and still find time for the occasional cross-dressing before the ravenous hordes of the living dead infect the entire world?Directed by the notorious Bruno Mattei (THE OTHER HELL), this ’80s Italian gut-muncher is infamous for its eye-popping gore, jaw-dropping dialogue and heart-stopping use of inappropriate stock footage. Also known as VIRUS, NIGHT OF THE ZOMBIES and even ZOMBIE CREEPING FLESH, HELL OF THE LIVING DEAD has been newly transferred in shocking High Definition from the original uncut and uncensored negative!

Mutants Of A Nuclear Disaster!

In the year 225 A.B. (After the Bomb), a group of post-apocalyptic bikers discover an abandoned research laboratory filled with food, water… and thousands of rats. But these are no ordinary vermin; these are super-intelligent mutant rodents with a ravenous appetite for human flesh. Can a bunch of heavily armed but not-too-bright human scavengers survive a night of terror against the most hungry and horrific predators on earth? Directed by the notorious Bruno Mattei (WOMEN’S PRISON MASSACRE), this hilarious Italian shocker is filled with over-the-top gore, bottom-of-the-barrel dialogue and attacks by what appear to be thousands of painted guinea pigs, all capped with a twist ending that must be seen to be believed. Also known as RATS OF MANHATTAN and BLOOD KILL, RATS: NIGHT OF TERROR has been newly transferred in flesh-ripping High Definition from the original uncut and uncensored negative!