HAZMAT (2013) Coming to US VOD March 11 and DVD April 1st from Uncork’d Entertainment. 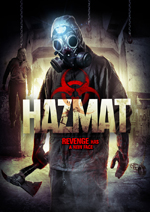 When a prank goes horribly wrong, a group of friends must fight for their lives in the pulse-pounding thriller.

It’s been years since a chemical plant accident killed 138 employees, including Jacob’s father—which has left Jacob obsessed with the plant ever since. Jacob’s friends lure him to the plant to play a prank, hoping he will come to his senses and realize the plant is not haunted. When Jacob discovers he has been duped, he snaps, picks up an ax and goes on a rage-filled, killing spree. Now, everyone trapped in the building, pursued by this disturbed ax-wielding maniac, must fight for their lives.