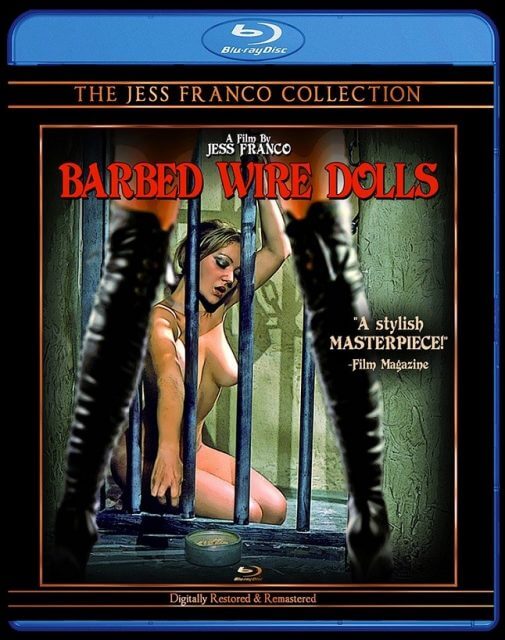 One of notorious Eurosleaze auteur Jess Franco’s most shocking films,1976’s BARBED WIRE DOLLS is finally out now on Blu-ray from Full Moon! The High-Def Blu-ray version of their best-selling Jess Franco Collection DVD series kicks off with BARBED WIRE DOLLS, one of the most outrageous entries in the unholy “Women-in-Prison” film cannon. In it, Franco favourite and lifelong muse Lina Romay stars as the wide-eyed Maria, an unfortunate young woman who kills her father (played by Franco) in self defence.She is tried, sentenced and shipped off to what is perhaps the grisliest, greasiest and most depraved women’s penitentiary in screen history where, at the hands of psychotic lesbian warden Monica Swinn, she and her fellow inmates are subjected to an endless onslaught of perverse psychological abuse. Filled to the gills with sex, Sapphic erotica and copious amounts of female nudity, this sleazy Franco masterpiece will rattle your cage in the sweetest way! Full Moon’s 1080p presentation of BARBED WIRE DOLLS is culled from a digitally remastered negative from Swiss producer Erwin C. Dietrich’s vaults and retails for $22.95. Special Features include an audio Interview with THE DUKE OF BURGUNDY director Peter Strickland discussing the films of Jess Franco and a vintage Jess Franco VHS Trailer reel.