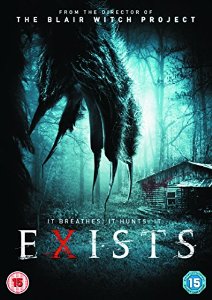 2015 is shaping up to be the year of the Bigfoot movie revival.Following releases of Bobcat Goldthwait’s Willow Creek and Braden Croft’s Feed The Gods , Eduardo Sanchez presents EXISTS. Remeniscent of the thrall of Bigfoot creature features that hit cinemas throughout the 1970′s, EXISTS is heavily influenced by those hairy glory days; SASQUATCH, LEGEND OF BOGGY CREEK, SNOW BEAST and NIGHT OF THE DEMON hang heavy in the air.

When a group of friends head into the remote Texas woods for a weekend of non-stop partying, their car hits a huge mysterious animal, which quickly disappears back into the darkness.But as the gang arrives at an isolated cabin, one of them realizes that the woods are home to a bloodthirsty Bigfoot, and it’s only a matter of time before he seeks them out.Soon enough, their weekend trip turns into a terrifying ordeal of survival of the fittest.