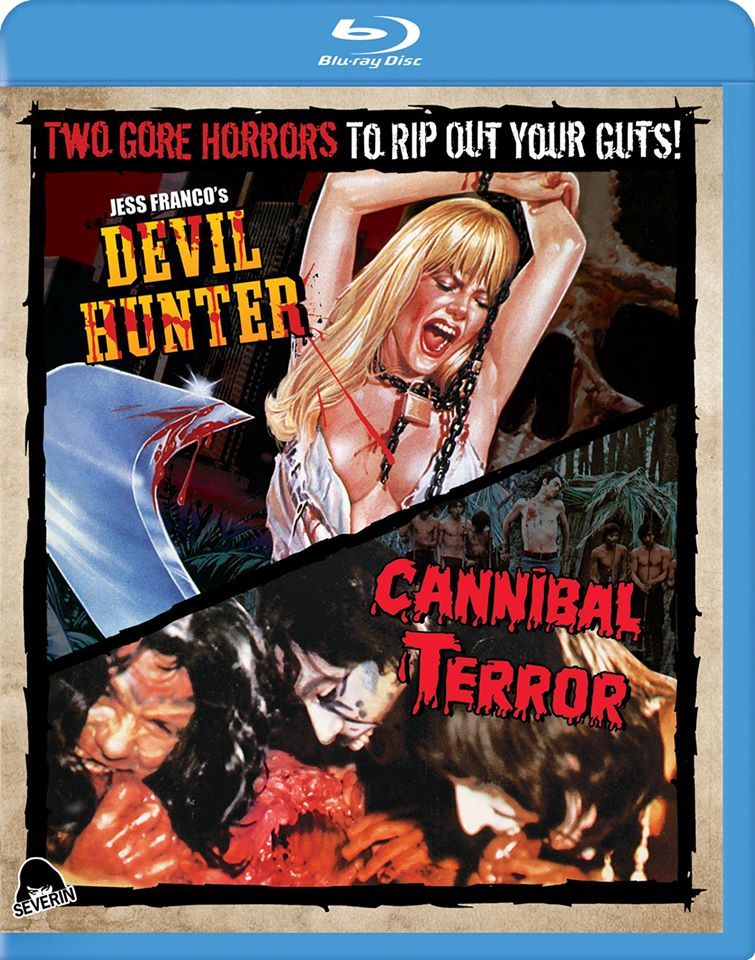 CANNIBAL TERROR– Even by the sleaziest standards of ’80s EuroTrash, it remains a film that must be seen to be believed: When a pair of criminal knuckleheads and their busty moll kidnap the young daughter of a wealthy tycoon, they foolishly choose to hide in a local jungle infested with ferocious cannibals. What follows is a mind-roasting exercise in atrocious acting, gratuitous nudity and gut-munching mayhem by a ravenous tribe of flesh eaters who inexplicably sport comb-overs and Elvis sideburns. Robert Foster (Inconfessable Orgies Of Emmanuelle), Pamela Stanford (White Cannibal Queen) and Burt Altman (Zombie Lake) star in this infamous Spanish/French co-production that was banned in Britain as one of the original “Video Nasties” and is now presented uncut, uncensored and mastered in Hi-Def for the first time ever in America! Director: Alain Deruelle / Starring: Robert Foster, Pamela Stanford and Burt Altman.

DEVIL HUNTER– King Of Euro-Sleaze Jess Franco (Bloody Moon, Macumba Sexual) takes on the ’80s Cannibal genre and delivers a jungle sickie like no other! When a safari of sexy babes and violent boneheads ventures into native-crazed wilderness, Uncle Jess unleashes a deluge of relentless nudity, dubious anthropology and his own brand of cut-rate carnage. Ursula Fellner (Sadomania), Al Cliver (Zombie), Robert Foster (Cannibal Terror) and Gisela Hahn (Contamination) co-star in this original “Video Nasty” — also tastefully known as Sexo Cannibal and Mandingo Manhunter — with something to offend everyone, now fully restored from the original Spanish negative and presented uncut and uncensored for the first time ever in America!Starring:Ursula Fellner, Al Cliver, Robert Foster and Gisela Hahn.