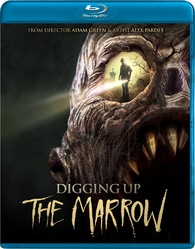 In Digging Up The Marrow, filmmaker Adam Green receives a package from a strange man (Ray Wise, Twin Peaks, X Men First Class, Robocop) claiming that he can prove that monsters exist. As the lines between fantasy and reality are increasingly blurred, he and his crew are taken on a mysterious, fantastical, and terrifying journey into the shadows and deep underground. Written and directed by Green an inspired by the original monster genre art of artist and Executive Producer, Alex Pardee, Digging Up The Marrow was an Official Selection at Frightfest 2014.