DAWN OF THE PLANET OF THE APES Arrives on 3D Blu-ray, Blu-ray and DVD from 24th November 2014.

ALL HAIL CAESAR! THE LEGENDARY FRANCHISE UNLEASHES IT’S MOST INTENSE BATTLE YET.

Get ready for worlds to collide like never before! Twentieth Century Fox Home Entertainment takes you to the center of the battle between apes and humans with DAWN OF THE PLANET OF THE APES on 3D Blu-ray™, Blu-ray™ and DVD from 24th November. Andy Serkis, Gary Oldman, Jason Clarke, and Keri Russell star in this thrilling next chapter of The Planet of the Apes.It is 2026 and humanity has been pushed to near extinction by a deadly virus.When a group of survivors desperate to find a new source of power travel into the woods near San Francisco, they discover a highly evolved community of intelligent apes led by Caesar (Andy Serkis).The two species form a fragile peace but dissention grows and the groups find themselves hurtling toward all-out war.Fans and critics flocked to the film, with The Hollywood Reporter raving that “In the annals of sequels, Dawn is to Rise of the Planet of the Apes what The Empire Strikes Back was to Star Wars—it’s that much better.“

DAWN OF THE PLANET OF THE APES BLU-RAY SPECIAL FEATURES: Deleted Scenes with Optional Commentary by Matt Reeves / Journey to Dawn / Andy Serkis: Rediscovering Caesar / Humans and Apes: The Cast of Dawn. 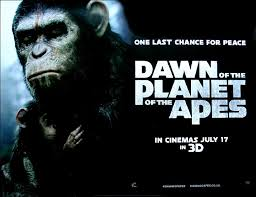