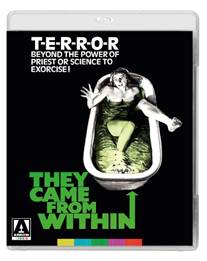 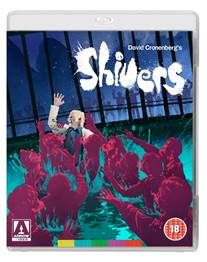 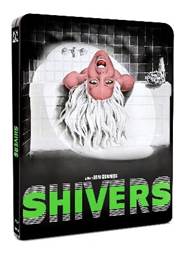 David Cronenberg’s debut Shivers (1975) follows the chilling story of a modern apartment complex overrun by a sexually transmitted parasite that insidiously spreads throughout the building’s population, turning the tenants into sex-obsessed zombie-like killers. Shivers is an intensely claustrophobic, subversive masterpiece and an essential entry in the oeuvre of one of the horror genre’s most gifted auteurs. Some 40 years after its release, it still retains its power to shock.Starliner Island is an idyllic community. Cut off from the rest of the world, the luxury apartment block affords its occupants the chance to escape from the hustle and bustle of the big city. But this isolation is to prove fatal when a new breed of parasite – a combination of aphrodisiac and venereal disease which arouses sexual aggression in its hosts – is let loose in the building, resulting in an orgy terror and mayhem.Known under a host of alternate titles such as The Parasite Murders and They Came From Within!, Shivers is the startling debut full-length feature from director David Cronenberg which anticipates the body-horror concerns of his later films such as The Fly and Videodrome.