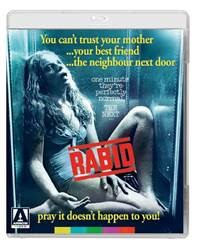 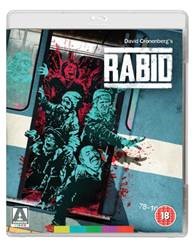 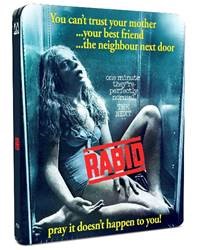 This new edition will mark the Blu-ray world premiere for Rabid, which served as the follow up picture to Cronenberg’s debut 1975 feature Shivers, continuing to explore the themes of viral diseases, yet upping the ante, the scale, the gore levels and the threat by unleashing the venereal terror on the whole of downtown Montreal.

Press Release: First come the Shivers… then, you turn RABID! Celebrated Canadian cult auteur David Cronenberg (The Fly, Videodrome) followed up his startling debut feature length proper Shivers with this tense and gory thriller which expands upon the venereal disease theme of that film, this time unleashing it on the whole of downtown Montreal – with terrifying consequences.When beautiful Rose (adult film star Marilyn Chambers) is badly injured in a motorcycle crash, Dr. Keloid, who is in the process of developing a revolutionary new type of skin-graft, seizes the opportunity to test out his as yet unproven methods. The surgery appears successful and Rose seems restored to full health. But all is not as it should be – Rose has been transformed into a contagious blood-sucker, endowed with a bizarre, needle-like protrusion in her armpit with which she drains the blood from those unfortunate enough to be in her vicinity.