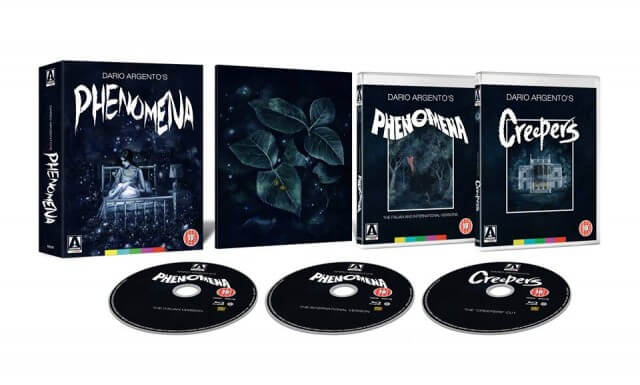 From master of horror Dario Argento (Suspiria, The Bird with the Crystal Plumage) comes Phenomena – one of his most eccentric and unique thrillers, featuring telepathic insects, maggots galore, and even a razor-wielding chimp!

Jennifer Corvino (Jennifer Connelly, Labyrinth), daughter of a world-renowned movie star, arrives in the so-called “Swiss Transylvania” to attend an exclusive girls’ school. However, a vicious killer is targeting the pupils, and sleepwalker Jennifer finds herself in the assassin’s headlights when her nocturnal wanderings cause her to witness the death of a fellow pupil. Aided by paraplegic etymologist John McGregor (Donald Pleasence, Halloween) and her own uncanny ability to communicate telepathically with insects, Jennifer sets out to track down the killer before she herself becomes the latest victim.

Released in 1985, towards the end of Argento’s decade-long golden age as a director, Phenomena co-stars Dalila Di Lazarro (Flesh for Frankenstein), Patrick Bauchau (Clear and Present Danger) and Daria Nicolodi (Tenebrae), and features lush cinematography by Romano Albani (Inferno) and a pounding prog rock score by Goblin (Deep Red, Suspiria). Presented here in a sumptuous new 4K restoration of the film and a newly created “hybrid” English/Italian audio track on the full length 116-minute Italian version, this is the definitive release of Argento’s creepy classic.

* The 116-minute Italian cut features approximately six minutes of footage for which English audio does not exist. In these instances, the hybrid track reverts to Italian audio with English subtitles.