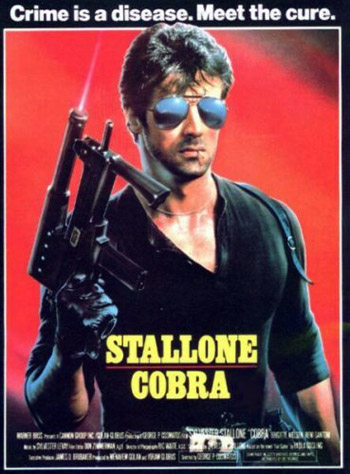 ‘’Stallone Is Cobra – The Strong Arm of the Law”

Marion Cobretti, aka Cobra (Stallone) is a police officer from the Zombie Squad, a division of the LAPD. Cobra takes on the jobs other cops can’t handle due to his ruthless methods. A hostage situation in a supermarket turns sour when a young man is killed. Cobra shoots and kills the criminal who belongs to The New Order, an underground militant outfit who’s motto is to ‘’ kill the weak and leave only the strongest alive to rule the world ’.Detective Monte (Robinson) is disgusted by Cobra’s methods and apparent disregard for police procedures.

The Night Slasher (Thompson), the Order’s leader is at the scene of a late night murder. Model Ingrid Knudsen (Nielsen) becomes the target of the New Order as she was the only living witness to their crime. She is placed under the protective custody of Cobretti and his partner, Sgt. Gonzales (Santoni) after an attempt on her life puts her in hospital.There is an army of killers united under the same cause and all hell breaks loose as they carve their way to Cobretti and co. leaving a trail of destruction behind them.

Cobra really packs a punch and is a welcome addition to Hollywood 80’s action movie cannon.Cobra re-teamed Andrew Robinson and Reni Santoni from Dirty Harry and was a brand new character for Stallone after the hugely successful Rocky and Rambo movie franchises.