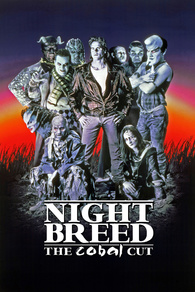 Scream Factory will bring to Blu-ray an Extended Director’s Cut of director Clive Barker’s cult film Nightbreed (1990), starring Craig Sheffer, Anne Bobby, and David Cronenberg. A community of mutant outcasts of varying types and abilities attempts to escape the attention of a psychotic serial killer and redneck vigilantes with the help of a brooding young man who discovers them. Based on the Clive Barker’s novel “Cabal”.

For years rumors swirled about substantial missing footage from the film. A fan-driven movement was created (www.OccupyMidian.com) to see the full version of the film restored and re-released, which was not only a more faithful adaptation of Clive Barker’s book “Cabal,” but is what originally he intended Nightbreed to be.