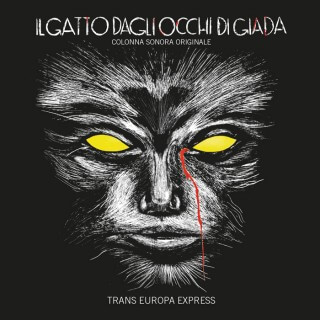 After 40 years since it’s theatrical release, presented here for the first time on vinyl is the phenomenal soundtrack for IL GATTO DAGLI OCCHI DI GIADA (also known as ‘Watch Me When I Kill’) – directed by Antonio Bido (director of THE BLOODSTAINED SHADOW). This top-notch score is undeniably catchy, yet has its creepy moments.

The film’s score was created by a supergroup specifically formed for this project and consisted of Adriano Monteduro (vocals and guitar; known for his 1974 record in which he was accompanied by prog band Reale Accademia Di Musica), Glauco Borelli (bass, already in Alberomotore), the well-known composer Mauro Lusini and Gianfranco Coletta who, besides being one of the pioneers of Italian psychedelia with Chetro and Co., was also a founding member of the Banco del Mutuo Soccorso. They chose the name Trans Europa Express with direct reference to Kraftwerk, who released their seminal record with the same title a few months prior. 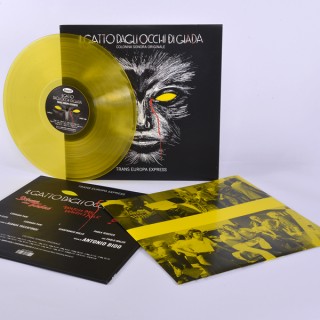 ‘Watch Me When I Kill’ certainly has the compositional techniques and instrumentation related to Italian prog, but only less attentive and interested listeners might dismiss it as mere “Goblin-esque”: eerie sound interludes percussion, carillon, piano pieces, distorted and mystical screams, an old tunes in gramophone style, moments of (seemingly) tranquility and rock.
The cyclical repetition and varied vaguely Goblin-ian guitar, cadenced by a pressing bass (which occasionally resembles that of Pink Floyd’s “One of These Days”), and a spectral and creepy scat vocal gives the listener pleasant moments of both fear and hypnotic tension.
The LP comes packaged in a heavy cardboard cover with hollow cat eyes and a yellow inner-sleeve with photos from the set provided by director Antonio Bido.
100 copies yellow vinyl
400 in black vinyl
Category: Upcoming Frights /
Wordpress Theme by ThemeZee