CAVE OF CULT TALKS TO BENNI DIEZ ,DIRECTOR OF STUNG / OUT ON DVD 26TH OCTOBER.

CofC: Hi Benni.Firstly I’d like to say how much I enjoyed STUNG. How did you make the transition from visual effects to director?

Benni: I’ve always directed my own stuff, back in the days making silly movies with my friends, and later in film school as well as for commercials afterwards.So it was always there, it was just a question when do I find a project that I can direct as a feature film.

CofC: How did you become attached to STUNG?

Benni: I have a manager in the U.S. who sends me scripts regularly. Stung was one of those rare ones where my mind immediately caught fire. I just knew I need to make this movie before anyone else does it. Luckily it was still available and so I could propose it to my friends in different companies.
Those turned out to be Ben Munz from Rat Pack and Todd Brown from XYZ Films.They liked it, and that’s how it started getting serious.

CofC: Did you change any elements of Adam Aresty’s script to fit around your own ideas ? 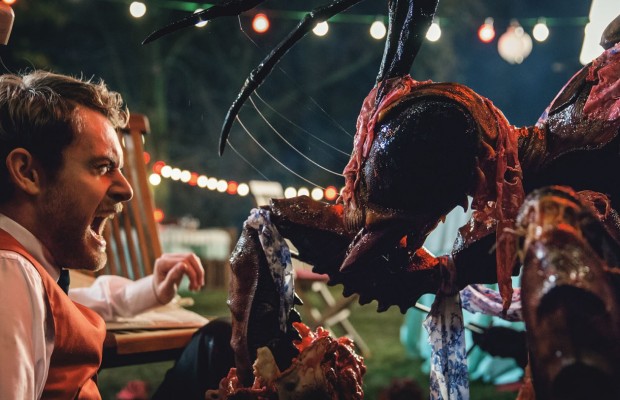 Benni: All the changes we’ve made compared to the first version of the script we did together. Adam was involved all the way, even during the shoot.We mostly invented some more visual gags, some little twists here and there, and modified some things because the reality of the shoot demanded it.
But overall the characters and the story stayed the same. It was a blast working with a writer who is so collaborative and open to ideas.

CofC: It’s amazing to have your film shown at FrightFest. How important is horror fan approval to you?

Benni: It really is the best. You spend so much time behind bars making a movie, and even afterwards a lot of the feedback now comes to you over the internet, kind of isolated from reality. It can warp your own perception of the whole thing. So it’s not only great, but necessary for your own sanity to get in touch with the people you’ve made this movie for. So many people came and thanked us for the movie at all the festivals we’ve visited. It’s fantastic, and it
helps you laugh about those anonymous tweets that tell you to never make movies again.

CofC: STUNG features some stellar casting choices including Clifton Collins Jr, Matt O’Leary, Jessica Cook and Lance Henriksen. How did Lance become attached and what was your experience working with such a horror legend?

Benni: I literally asked the U.S. producers if they could reach out and ask him. I’m a huge Aliens fan and Lance is a legend to me. So imagine getting that phone call from your producer: Lance is doing the movie! It was a blast. Having the android from your favorite movie play in your first own feature. And he’s such a sweet and generous guy. We only had him for a week, but his excitement for the craft, and the joy in his eyes when watching our creature effects artists do their work… The whole cast was that way. It sounds cheesy, but I really feel blessed with the opportunity to learn from those guys.

CofC: Do you plan to stay within the genre and what is next for you as a director?

Benni: As much as I love Horror as a genre, I’m even more excited about Science-Fiction. I’m working on a concept for a Sci-Fi Actioner among other things. Also getting more into screenwriting myself, right now writing a comedy for Rat Pack for example. It’s an exciting time, and I’m looking forward to seeing what my next feature turns out to be. We’ll probably know more later this year.