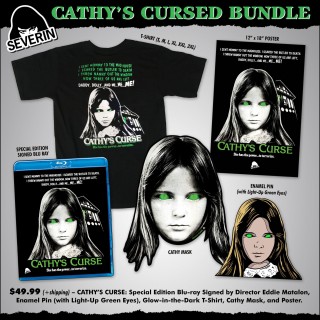 Severin Films will possess the souls of genre fans with the first ever fully restored presentation of Canadian nightmare generator CATHY’S CURSE. Fans can now experience one of the strangest EXORCIST/OMEN/CARRIE-inspired grindhouse hits like never before, transferred in 2k from recently-found film elements and featuring revealing new Extras with long-lost star Randi Allen and producer/director/co-writer Eddy Matalon.

Forget what you’ve seen in blurry bootlegs and crappy budget packs. This first- ever restoration of the depraved Canadian shocker is being hailed as the genre rediscovery of the year: In 1947, a young girl is roasted alive in a car accident. Thirty years later, her grown brother returns to their childhood home with his mentally unstable wife and sweet daughter Cathy. But when the dead aunt’s vengeful spirit possesses the child, it will unleash an unnerving nightmare of creepy mediums, demonic dolls, and plenty of sick ‘70s foul-mouthed moppet mayhem.