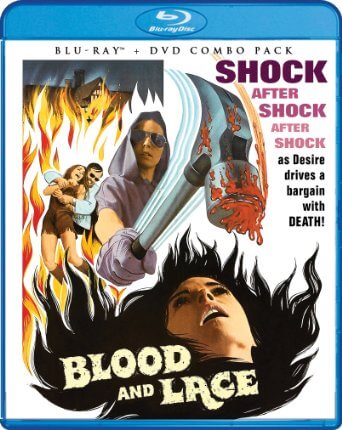 She searched through the dark corridors of the unknown, only to find… the unbearable.
Available for the first time on a home entertainment format, the 1971 cult favorite Blood and Lace is a twisted tale of horror frequently cited as a precursor to the slasher films of the late 70s and early 80s.
After her mother’s brutal murder at the hands of a hammer-wielding maniac, teenaged Ellie Masters (Melody Patterson) is suddenly orphaned. She is sent to a home for children run by the enigmatic Mrs. Deere (Gloria Grahame, 1952 Best Supporting Actress Academy Award winner for her role in The Bad and The Beautiful), in spite of the concern that Ellie will be the newest target of her mother’s killer. But as terror strikes again and again, it becomes unclear who might be the bigger threat to Ellie’s life: the mysterious murderer with a hammer… or her sadistic new caretaker.
With borderline insane plot twists, and some unexpected performances by two faces familiar to fans of classic sitcoms: Vic Tayback (“Mel” from Alice) and Len Lesser (“Uncle Leo” from Seinfeld), this little-known horror gem is a jolting, terror-filled thriller you’ve got to see to believe.