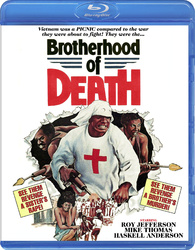 When Soul Brothers Meet The Klu Klux Klan, The Sheets Are Gonna Hit The Fan! Pro football legends Mike Thomas, Roy Jefferson and Mike Bass star as Vietnam vets who return to their redneck hometown only to find the local Klan has triggered a frenzy of racism, rape and murder. But this brotherhood learned all about guerilla combat and sadistic torture while fighting Whitey’s war…and now the KKK is gonna pay!