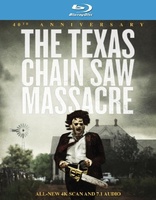 A tale of five 20-somethings whose free-spirited road trip becomes a terrifying descent into madness. When they find themselves isolated in a rural Texas community, they fall into the clutches of a monstrous clan of Texas cannibals and find themselves being whittled away by the chainsaw-wielding Leatherface.

It’s been imitated and remade, but never equaled. The Texas Chainsaw Massacre rose from a notorious 1974 sleeper sensation to rank as one of the greatest horror films ever made. The film is being released with an all-new 4K digital transfer and newly created 7.1 surround sound mix supervised by director Tobe Hooper. This release marks the only transfer of the film to go back to the original 16mm A/B rolls, the actual film that rolled through the cameras.

Special features and collectibles include: