February 8, 2017 / giallo1971 / Comments Off on OUT TODAY!! Scream Queen Legend Barbara Crampton goes BEYOND THE GATES. 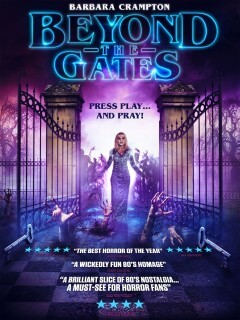 Wanna see a mash-up of THE VIDEO DEAD, FROM BEYOND, TERRORVISION and JUMANJI??

Get ready to experience this season’s freshest horror. Highly praised during its recent premiere at FrightFest 2016, Beyond the Gates is a gore-filled tribute to 80’s horror and board games of the same era.

Seven months after their father’s disappearance, estranged brothers Gordon and John Hardesty reunite to liquidate their Dad’s anaemic video store. Soon after, they unearth an old VHS board game that acts as an inter-dimensional hub to a nightmare world where their Father’s soul is trapped and can only be saved by playing the game… Tense, scary and full of nostalgic thrills, Beyond the Gates is directed by Jackson Stewart and stars Graham Skipper, Chase Williamson, Matt Mercer, Brea Grant and Re-Animator‘s Barbara Crampton.